During my last visit to HalfPrice Books, I was wandering through the SF/Fantasy section when I saw this: 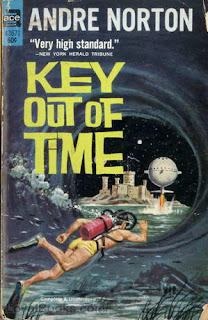 Honestly, though I'm a huge fantasy reader, I've never been interested in any of the books I've seen in the genre SF/F section.  But the front cover image and the back cover summary set off my Ocean Girl radar, and, after all, it was only about $3.
The nutshell:  A pair of Time Agents is studying a mostly-ocean planet which was once home to a feudal civilization, but now seems devoid of any intelligent life.  Intending only to view the past through a time portal, the agents - along with a young Polynesian woman and her two dolphins, with whom she has a telepathic bond - are accidentally sucked through and caught in the middle of a potentially cataclysmic war.
It was a fun read overall, though it took a bit of suspension-of-disbelief for certain concepts or plot points.
The good points:  I loved the descriptions of the Foana, and the telepathic bond among Karara, Loketh, and the dolphins.  In terms of plot, the most exciting and intriguing parts were towards the end.
The issues:  The story is mainly action/plot-oriented, so characterization and background got a bit of the shaft.  Especially toward the beginning, it felt like there was more "telling" than "showing" in terms of the main characters and the history of the Time Agent program.  The description of Ross Murdoch, for instance, was very cliche: "Ross had been a loner--living on the ragged edges of the law, [...] too ruthless, too individualistic for [his] own age" (p. 9).
And the whole concept of the Time Agent program was treated almost like a given -- the summary of how it began left me still wondering what the point was.  Why did Earth's government decide to invest in this project in the first place?  What was the necessity?
Even some plot elements didn't seem adequately explained.  I didn't understand how Ross could have learned enough of the ancient Hawaiikan (Hawaiika is what his people call the planet) vocabulary, in such a short time, to carry on all the conversations he did with Loketh and the Rovers.
The most annoying thing, though, was how often the narrator refered to Ross as "the Terran."  After the third time I kept thinking, Enough already!  I know he's from Earth - you don't have to keep reminding me!  Plus, it distances Ross from the reader, making him seem less like an individual, unique character.
Not having read much (well, any) genre SciFi/Fantasy, I wonder if some of these issues - especially the plot vs. characterization focus - are common, at least for older works (Key Out of Time was published in 1963)?  In any case, my next vintage SF/F foray may be into the Edgar Rice Burroughs Tarzan books.  The Moon Maid and The Cave Girl also sound like interesting titles.

January 23, 2018
Originally posted at LiveJournal on Nov 11, 2013 I have a new favorite song. I found these guys while looking for good versions of the  Last Unicorn  theme, since apparently the version from the movie isn't available for Amazon download.  Nor is the complete soundtrack -- unless you want it in German.  For $44.99 used.  Or $176.27 new. This is a very pretty case, though. Well, I remembered I used to love listening to the Kenny Loggins version in the car, from my mom's  Return to Pooh Corner  cassette, so I figured that was good enough.  It really is a lovely version, with just the right mood -- deep and melancholy, but also hopeful, and those few bursts of joy.  And I like the way his tone rises in "when the fu ture  is past," instead of following the usual pattern.  It's a small thing, but for some reason it makes a difference. Anyway, I also saw that there was a "Gregorian" version, and of course I was curious about how that would sound, t
Post a Comment
Read more

January 23, 2018
Originally posted at LiveJournal on Dec 29, 2011 I'm watching a Modern Marvels episode on 70's technology, and the segment on video games reminds me of my very first TV video game:  SOCRATES! My older cousin handed it down to my brother and me when I was nine or ten, and it was the coolest. thing. ever. Check out this amazing boot-up sequence! I remember playing a dress-up-doll-type game where you created an outfit for a little girl and then chose an environment for her to stand in (or was it the other way around?) - downtown, out in the country, in a TV studio... Oh! Oh!  And my first hand-held video game - the Tiger LCD Little Mermaid game I begged my mom to buy from Toys 'R Us.  I used to bring it to school to play at recess.  It looked something like this: image from Etsy  Except it was purple, and the game had to do with finding those mer-babies from that one TV episode.  And sometimes the bad-guy would trap Ariel in a bubble, and she'd h
Post a Comment
Read more