January 23, 2018
WARNING:  This post is NSFW (Not Safe For Work)
Back in 2013-2014, I was a contributor to the Insatiable Booksluts blog, which specialized in small-press literature reviews, Reading Rages™, and other fun and snark-tastic book-related business (I never did master Susie’s particularly awesome brand of snark myself).  It’s one of the most fun projects I’ve taken part in, and I’m really going to miss working with Susie, sj, and the rest of the IB team.
Unfortunately, the site has since been retired, but I’ve decided, with Susie’s permission, to resurrect some of my posts here and at Postcards.
.  .  .  .  .

Originally posted at Insatiable Booksluts on April 9, 2014
One of the first Anne Sexton poems I ever read was “Cinderella,” her adaptation of the Grimms’ tale, during my freshman year of college.  I didn’t know at the time that she’d written sixteen other fairy tale verse adaptations.  But a few weeks ago, while looking for a way to fuse Sex Month, Poetry Month, and fairy tales, I found a reference in one of the SurLaLune discussion boards (I think it was this one) to Transformations. 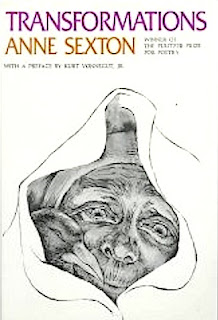 The jacket flap describes this collection as “a strange reenactment of seventeen Grimm fairy tales.”  Each of these reenactments has two parts – an introductory poem that explores some theme from the tale, and a summary-in-verse of the tale itself.

Now, I almost chose “The Little Peasant” for this post, just because of Barbara Swan’s hilarious accompanying illustration: Look at the dude’s expression (that’s the parson getting jiggy with the miller’s wife – or, how does Sexton put it?  “Danc[ing her] dingo-sweet”… *snort*).  That is a look of pure, cocky, I-know-it’s-bad-but-damn-it-feels-good contentment.  I’m not sure why he has pointy elf ears, but they do add to the hilariously creepy vibe, so why not? XD And it was first published in Playboy, after all. But I was much more taken with Sexton’s take on “Rapunzel.”  There’s something really lovely – if, yeah, kiiiind of incesty, at least in the intro – about it.  And with the flower imagery, plus the idea that keeping Rapunzel makes Mother Gothel feel young, this poem feels oddly like a precursor to Disney’s Tangled.  Though, in Sexton’s version – and this is another thing I really liked about it – Gothel doesn’t feel so much like a villain.  In fact, I felt a bit sorry for her in the end. Because the full poem is a bit long, I’m only including the intro here.  I definitely recommend reading the rest of the collection, though – Amazon has some good prices for the paperback version, or you can do as I did and check your library database.  Interlibrary loan FTW!

A woman
who loves a woman
is forever young.
The mentor
and the student
feed off each other.
Many a girl
had an old aunt
who locked her in the study
to keep the boys away.
They would play rummy
or lie on the couch
and touch and touch.
Old breast against young breast . . .
Let your dress fall down your shoulder,
come touch a copy of you
for I am at the mercy of rain,
for I have left the three Christs of Ypsilanti,
for I have left the long naps of Ann Arbor
and the church spires have turned to stumps.
The sea bangs into my cloister
for the young politicians are dying,
are dying so hold me, my young dear,
hold me . . .

The yellow rose will turn to cinder
and New York City will fall in
before we are done so hold me,
my young dear, hold me.

Put your pale arms around my neck.
Let me hold your heart like a flower
lest it bloom and collapse.
Give me your skin
as sheer as a cobweb,
let me open it up
and listen in and scoop out the dark.
Give me your nether lips
all puffy with their art
and I will give you angel fire in return.
We are two clouds
glistening in the bottle glass.
We are two birds
washing in the same mirror.
We were fair game
but we have kept out of the cesspool.
We are strong.
We are the good ones.
Do not discover us
for we lie together all in green
like pond weeds.
Hold me, my young dear, hold me.

A woman
who loves a woman
is forever young.

February 20, 2018
WARNING:  This post is NSFW (Not Safe For Work) In the past eight years, I've reviewed plenty of amazing books, less-than-amazing books, really-kind-of-terrible books, and just-plain-meh books.  The reading experience has been a mixed bag of awesomeness and problems, but there was always something in each book that kept me going, whether it was the likable-enough characters, the plot that hooked me, or the world-building that made me want to stay in that setting just a little while longer. But an inevitable part of any reader's life is the DNF pile -- the books they simply Did Not Finish.  The books that were so ridiculous, or so problematic, or so put-down-able, that you simply can't stubborn your way through them.  Normally, I don't give those books a second thought after I've returned them to the library or sold them back to Half Price, but you know what?  It's time to give a shout out to my DNF pile -- at least the most recent/memorable ones from the adu
Post a Comment
Read more