WARNING:  This post is NSFW (Not Safe For Work)

In the past eight years, I've reviewed plenty of amazing books, less-than-amazing books, really-kind-of-terrible books, and just-plain-meh books.  The reading experience has been a mixed bag of awesomeness and problems, but there was always something in each book that kept me going, whether it was the likable-enough characters, the plot that hooked me, or the world-building that made me want to stay in that setting just a little while longer.

But an inevitable part of any reader's life is the DNF pile -- the books they simply Did Not Finish.  The books that were so ridiculous, or so problematic, or so put-down-able, that you simply can't stubborn your way through them.  Normally, I don't give those books a second thought after I've returned them to the library or sold them back to Half Price, but you know what?  It's time to give a shout out to my DNF pile -- at least the most recent/memorable ones from the adult section.

These are my Top 6 Adult DNFs, in order of how far in I got before giving up.  Why Top 6?  Because I'm unconventional like that :) 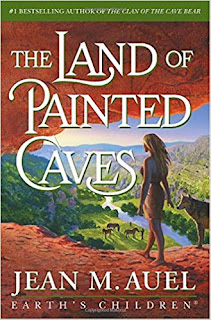 The Land of Painted Caves, by Jean M. Auel.  I was obsessed with this series in high school.  The Ice Age world and its societies were absolutely fascinating, and Ayla was so amazing and strong and kick-ass, and I totally wanted to know everything that happened to her.  Would she ever re-unite with her son, Durc?  Would she become the most powerful shaman and bring peace between the Others and the Clan?

But by the time the final book in the series came out eleven years later, I had grown up enough to see some of the big flaws in the series, especially in the last two books.  Post-Clan of the Cave Bear, Ayla became more and more of an epic Mary Sue -- she was the most self-sacrificing and beautiful goddess woman, she came up with all the inventive breakthroughs, all the men wanted to jump in her furs!

And sweet Doni, was Jean Auel eager to show off her research.  We just had to know every aspect of ancient European life, whether it moved the story forward or not.  Isn't it just fascinating how the Zelandoni get rid of their waste?

Still.  These books had major nostalgic value for me, so I was absolutely going to give The Land of Painted Caves a chance.  Ok, so right away, even Ayla's offspring is utterly perfect -- baby Jonayla can totally control her bodily functions so as not to inconvenience her parents.  And ok, the dialogue is super cheesy and expositioney, and the plot is moving forward as slowly as a glacier, but I can keep pushing forward, right?

I made it 200 pages in (the book is over 700 pages long), before my nostalgia goggles finally gave out.  I wanted to know how it would all end, I really did, but I did not want to slog through 500 more pages to get there.  I totally felt like a bad reader for this, but I ended up just skipping to the final few chapters, just to see what happens, and then I sold the book to Half Price.  It wasn't even nostalgically-valuable enough to keep in my personal library. 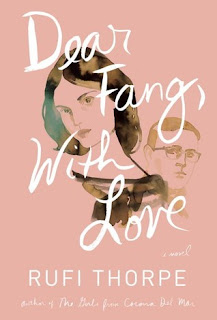 Dear Fang, With Love, by Rufi Thorpe.  I had really high hopes for this one as well, because it was about a girl with Lithuanian roots visiting Vilnius for the first time on a summer trip.  I was about Vera's age when I took my first trip to Lithuania, with my grandmother, and I expected this to be a neat trip down memory lane.

And the narrative structure did hook me at first.  The story is told from both Vera's and her father's points of view, starting each chapter with Vera's e-mails to her boyfriend, Fang, and continuing with her father's first-person narration of the history tour he and Vera signed up for.  Vera's voice was really funny at first -- she tells Fang about how she learned that the word "baroque" means "imperfect pearl," and proceeds to describe how she thinks that should be adopted as a euphemism for the clitoris.  Ok, it's a very irreverent reflection on Vilnius Old Town, but I'm open minded, and the phrase "I'm going to go stroke the baroque" is freaking hilarious.

But the Lithuanian setting started to feel really incidental -- Vera even conflates Russians and Lithuanians at one point, which is a HUGE no-no -- and it definitely took second place to the focus on Vera's strained relationship with her father and his attempts to get back in her good graces after being both too drunk and too practical for her mother to let him play a role in Vera's childhood.  And I'm getting really sick of portrayals of anti-depressants as this necessary evil that must be weaned off of as soon as possible or it's going to destroy your body and ruin your personality.  Overall, the book got too depressing.  Even the lessons on Lithuanian culture seemed to focus more on the grim aspects than anything else -- which, of course, are very important to know, but I'd like to show the bright sides of my heritage as well!  After about five chapters, I was unhooked, and decided I'd get my Lithuania fix elsewhere. 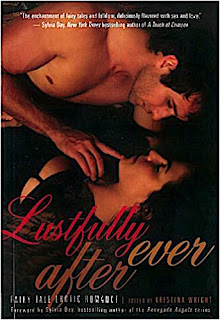 Lustfully Ever After, ed. Kristina Wright.  I'm really not into erotica, normally.  Overly graphic descriptions of sex and bodily fluids make me run for the brain bleach.  That said, I did have a lot of fun with Wright's previous collection of erotic fairy tales, which I reviewed here.  It was a very unique spin on the classic tales, and it felt like the sex served a purpose that fit with each story's theme.  The sequel, on the other hand... it felt like the sex was just there for its own sake, and the graphic, kinky descriptions were waaaay too cringe-inducing this time.  Plus, the rape fantasies, yo.  Not my thing. 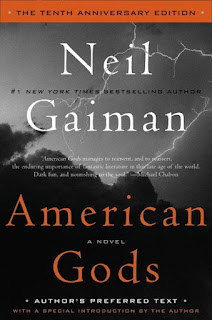 American Gods, by Neil Gaiman.  In his foreword to the Author's Preferred Text edition, Gaiman admits that this is one of those books people either love or hate.  Well, I didn't hate it, per se, but I really, really didn't love it.  It was far too gritty, and the characters throwing out casual racial slurs was a huge turn-off, and I just did not want to wade through all the depressing grittiness to get to the folklore and mythology.  None of the characters were even remotely likable enough, and I definitely wasn't hooked by the be-Mr.-Wednesday's-bodyguard plot.  It was really too bad, because I loved Gaiman's treatment of gods and faeries and cosmic entities in the Sandman comics, and I was expecting a similar experience in American Gods, but that's not at all what I got out of it. 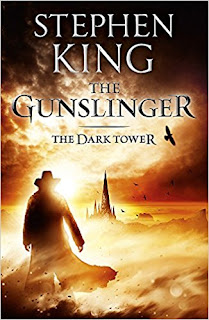 The Gunslinger (Dark Tower #1), by Stephen King.  The Insatiable Booksluts had really talked up the Dark Tower series as this epic, unique fantasy adventure, so I really wanted to give it a try.  But I just Could. Not. Get past the scene, within the first few chapters, in which the gunslinger threatens answers out of a woman by shoving his gun into her vagina.  Nope.  Just.  Nope. 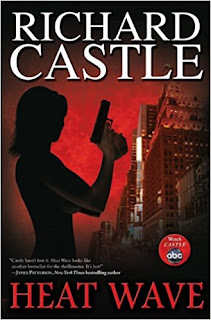 Heat Wave, by Richard Castle.  My family goes through TV show phases, watching the same show every night (if it has reruns) for several weeks or even months before moving on to our next obsession.  We've gone through the Mash and Cheers phases, the Star Trek Next Generation phase, the Star Trek Voyager phase, the Castle phase, and now back to the Mash phase.

Castle was definitely a fun show, with its cocky mystery writer star and the no-nonsense-but-with-a-tragic-backstory police detective he partners with, and I absolutely loved the wisecracking, goofy duo of Ryan and Esposito.  So I thought it would be fun to actually read one of "Richard Castle's" books about the team-up of cocky journalist Jameson Rook and sexy homicide detective Nikki Heat.  I'm not usually a fan of mystery novels or police procedurals, but I thought: if this is going to be like the show, I can totally make an exception.

...Eh.  I couldn't get past Chapter 1.  The writing was too cheesy, the "witty" banter that made the show funny didn't translate on paper, and I simply was not hooked enough by the generic murder mystery or the boring characters to want to spend 208 pages finding out what happens to them.  The show made every mystery seem unique, and the characters both stood out as individuals and fit into a very solid team.  The book failed to capture that magic, or to convince me that "Richard Castle" was really an awesome writer worth following.  I'll stick to watching the show.

What about you, fellow readers?  What are your most memorable DNFs?  What does it take to really turn you off from a book?  Have you read any of the ones I mentioned above, and think I should give them another chance?

And for more DNF shout-outs, see my Top 5 Juv/YA DNFs at Postcards.