Of course this title caught my eye when I saw it on the library's New Books shelf. 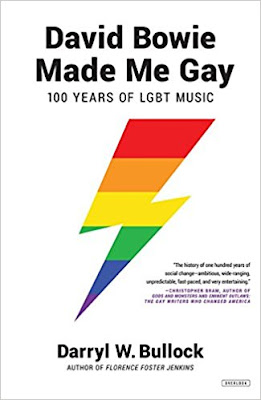 And here are some notable artists and songs mentioned in the book:

Gertrude "Ma" Rainey was known as The Mother of The Blues, "the first nationally recognised star of the blues era."  "Prove it On Me Blues" was her most clearly and outrageously lesbian-themed song (well, outrageous for that time, anyway).

Patrick Haggerty's Lavender Country was the first openly gay country album, released in 1973 and added into the Country Music Hall of Fame in 2000.  Note:  the video below contains some very explicit language.

Of course I have to include a Bowie song!  The "Ashes to Ashes" video features some of the Blitz Kids, young artists who would hang out at the Blitz club -- known for its mix of punk, glam rock, and electronica -- in Covent Garden, London in the late 70s and 80s.

And finally, Kenyan rapper Art Attack and singer Noti Flow released a controversial video in 2016 for their song, "Same Love," a commentary on the treatment of LGBT people in Kenya and a celebration of same-sex love.  The video was quickly condemned by the Kenyan Film Classification Board because it features several same-sex couples kissing and having sex (NSFW).

David Bowie Made Me Gay is a fascinating book, and one I highly recommend.